Available to listen to via QR code at the exhibition exploring drawing in all its forms, Sixty + Ten at the Whitaker Museum & Gallery, Rossendale. in NEWS on menu. Out on CD soon via my Bandcamp page (currently under construction) 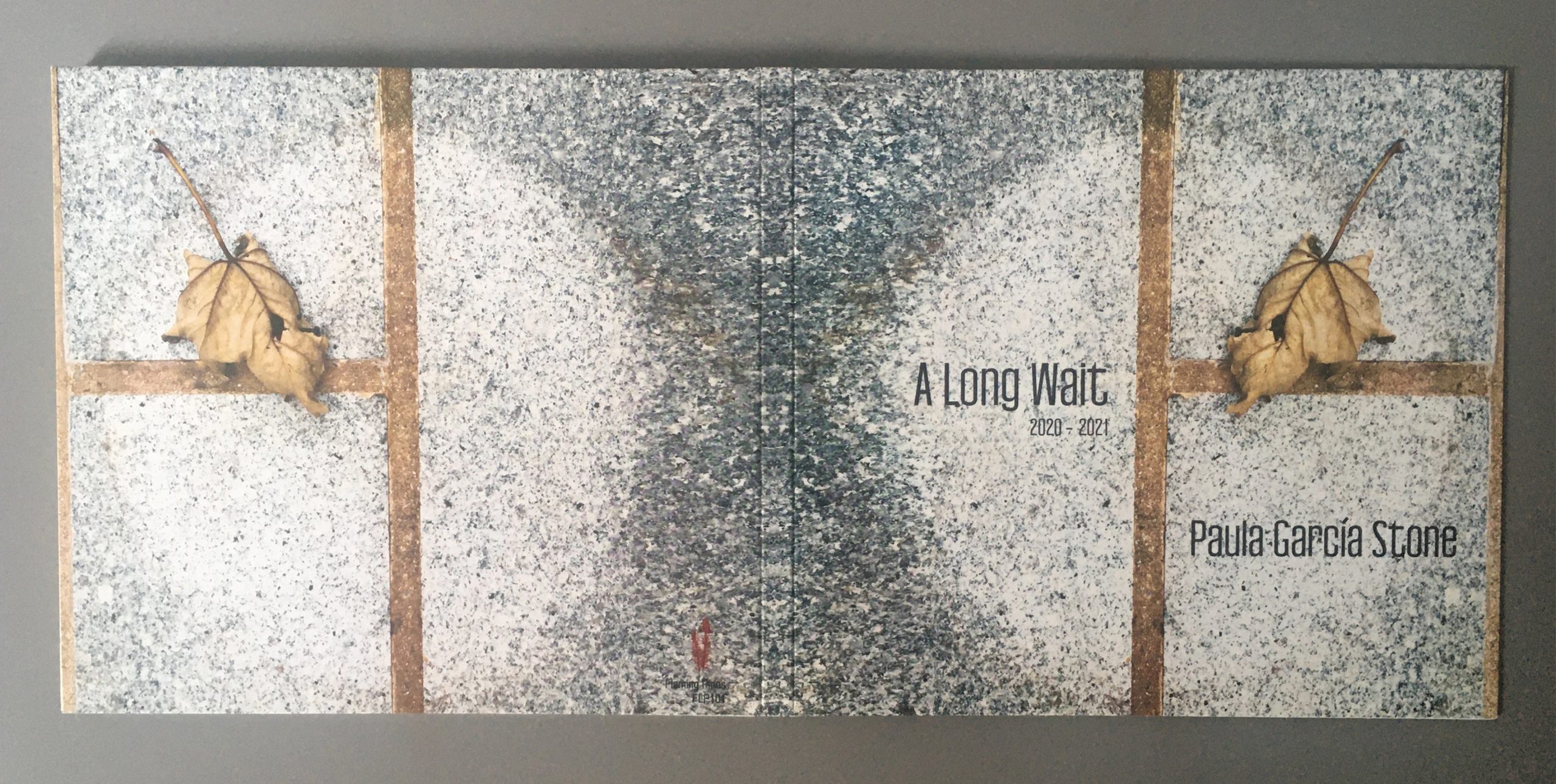 A Long Wait explores vulnerability and isolation during 2020 to 2021. Placed in the “clinically extremely vulnerable” category, Paula García Stone was not able to leave her house at all during the lockdowns of 2020. She was also unable to walk for most of the year due to fractured bones in one of her feet. A Long Wait is the product of this period of grief, loneliness and frustration. Turning to her domestic and local soundscape for inspiration, she composes here with lawn mowers, medical equipment, insects and her own breath. “I found that generally my neighbourhood all had their lawn mowers out and were doing DIY, unlike the new found silence people seemed to be describing at the time. Somehow I managed, and I found domestic sounds and my own medical paraphernalia interesting and useful in the bigger context of my environment. I hoped to amplify grief and at times frustration, as well as the rhythm of time passing by,” she explains.
Both sadness and the convoluted and disorienting experience of time are important themes in this album, but it also marks lighter, more uncanny moments amid the difficulties of the past year. Heavy rainfall, experiences of extreme heat and humidity, and even a visitation by flying ants, swirl together in the compositions, sitting uneasily alongside García Stone’s quiet breaths, medical devices and discontent.
An album of both loud and quiet dismay as well as unexpected comforts and surprises.
Out July 16 on CD/Digital.

About the artist:
Paula García Stone is an Anglo-Hispanic visual and sound artist. Due to type 1 diabetes and its complications, García Stone has been in and out of hospital since 1975. These experiences of both health and vulnerability as well as the medical system are central to her practice. She has been active within the arts for more than 30 years, and began composing with sound in 2003. She has worked both as a solo artist and collaboratively across composition, installation and film. For more: paulagarciastone.com

JULY 2021:
https://linearobsessional.bandcamp.com/album/burning-cacti
First cassette tapes of collaborations with Sue Lynch. Great to be part of Livear Obsessions ‘Liminal’ series. Burning Cacti is a composition on tenor sax by Sue Lynch which I play into, and Lockdown Duet is a soundscape by myself, which Sue plays to with some mixing by me. In memory of Carole Finer. Cover image Paula Garcia Stone. Cassette design by David Little. Thanks to Richard Sanderson (photos too) 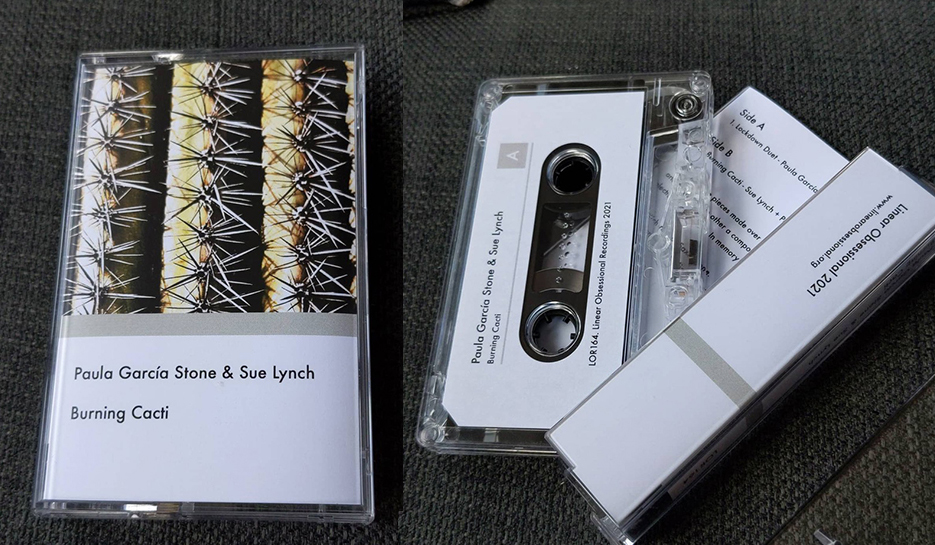 Self Isolating Compilation from Linear Obsessional. April 2020
No 72. Time stretching.   (This track has been played on other radio programme)
https://linearobsessional.bandcamp.com/album/self-isolating-compilation

Self Isolating Congregation May 2020 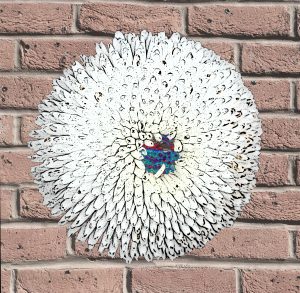 Following the Self Isolating Compilation (above) , we were asked to compose a piece from 4 of the other tracks, which were chosen randomly for us. The results are unexpected!…
Mine is No 10 (Untitled)
Cover design by Paula Garcia Stone
https://linearobsessional.bandcamp.com/album/self-isolating-congregation

Her Indoors
Track 1. Comfort
My contribution to a compilation against domestic violence… curated by Jude Cowan Montague
https://womencomposerscollective.bandcamp.com/album/her-indoors 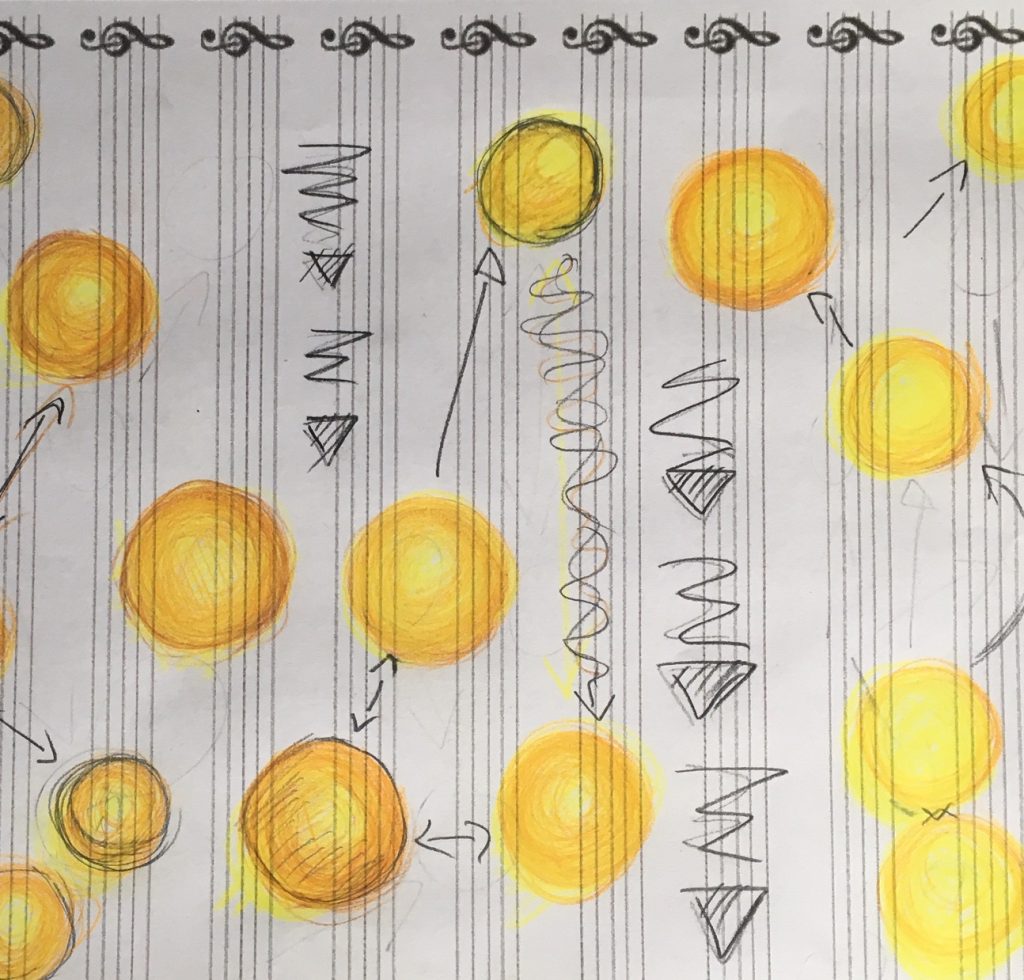 Sound work ‘Las doce en punto y sereno’ winner in the Digital Media Category at ‘Inspired by’ (objects at the V&A) showing at the Morley Gallery 17th May to 17th June 2016. 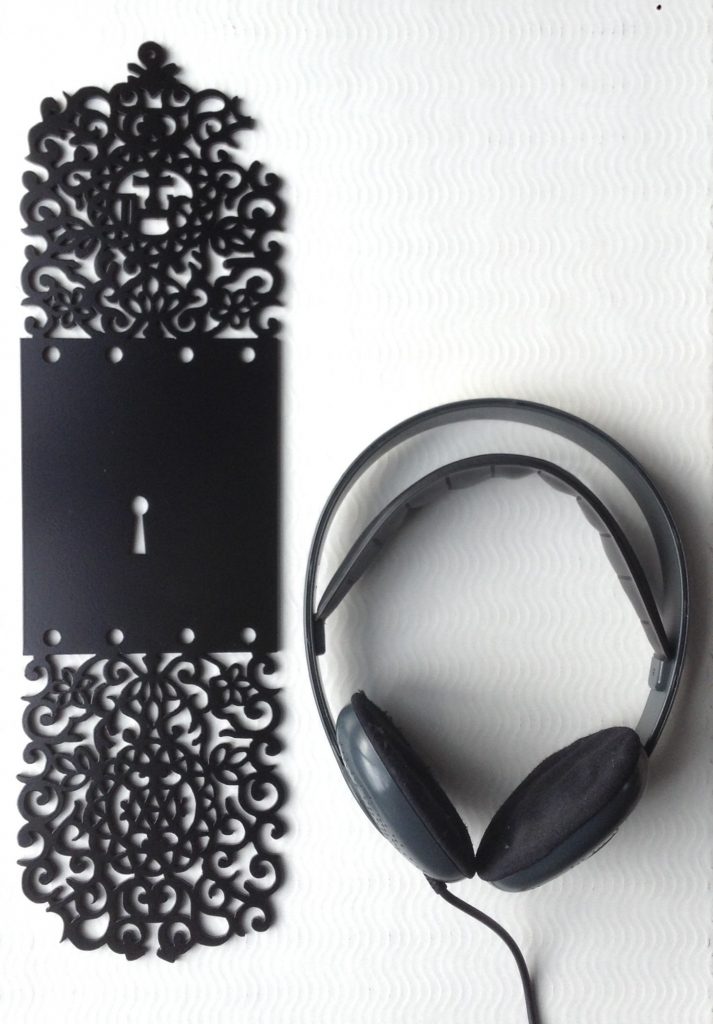 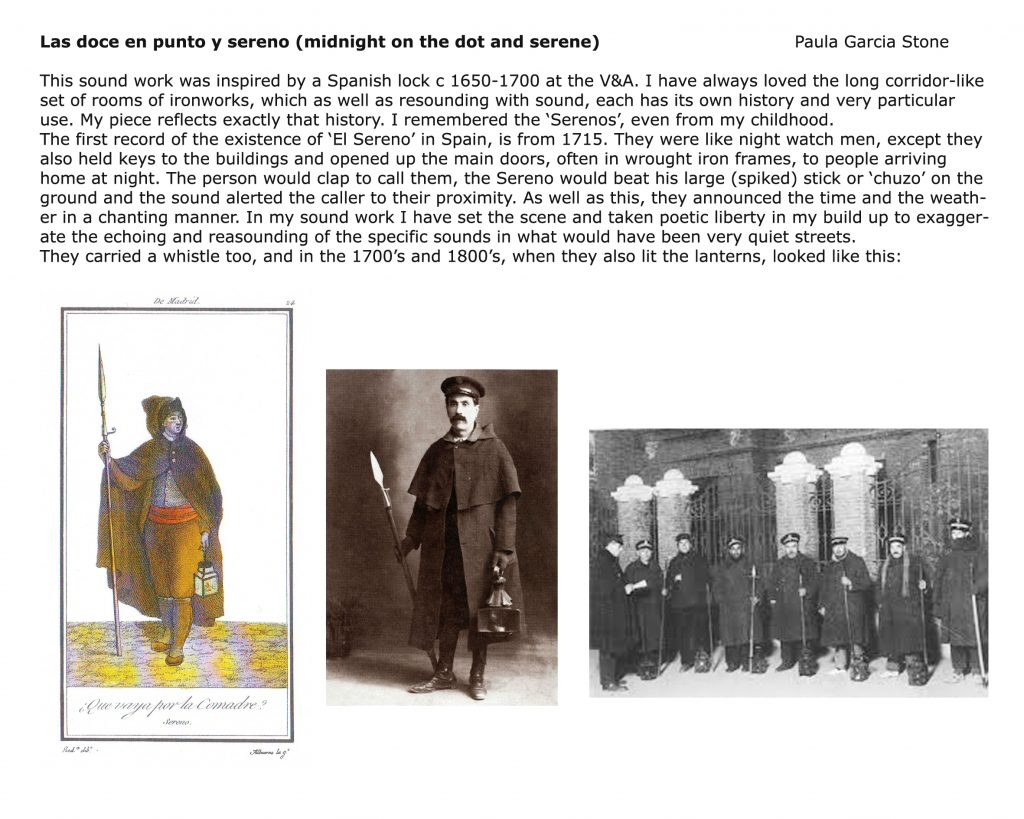 Sound work made for a tricycle but developed on a sonic bike called Erna Schneider Hoover – inventor of the computerised telephone switching system: 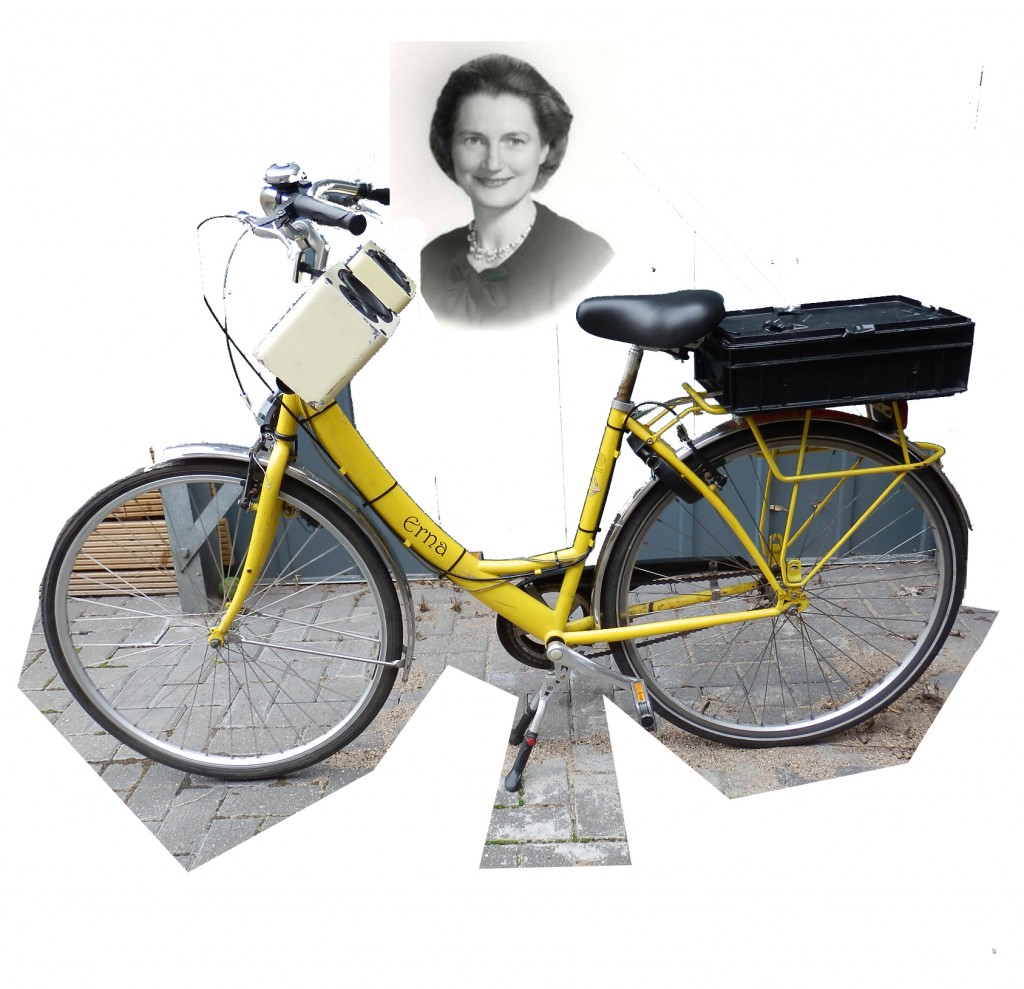 Developed for the London Pedalling Games 2015 with the BRI

Although I did not ride this bike myself I made sounds for her after walking in and around the London Fields park, and I aimed to recreate its throbbing vitality, through rhythms built around the sounds in individually assigned activity areas within the park itself – other than the enormous row of bottle banks which sits just outside at the north end – ghostly sounds of past presences…

I like the relationship between Erna’s interest in making it possible for people to communicate across the globe more easily and frequently, through computer programming, with what we are doing here with GPS. Her use of ‘feedback theory’ and centering on the input and output aspects, all relate to working with electronic sound and mapping. It is the spacial connectivity as well as the technical specifications that relate to Erna’s invention. Space and time. This circular notion in cause and effect can be felt through the triggering of sounds while choosing to enter the zones by the rider, and I think this is what the public get from riding these bikes. I very much enjoyed meeting and working with the other artists involved in this particular project.

The Bicrophonic Research Institute (BRI)  invited nine artists and composers to make new sound works for their ‘sonic bikes’ in Hackney this summer. These pieces were presented at a sonic cycling weekend ~ The Summer Pedalling Games, held in London Fields on 5th and 6th September. The bikes will be available for the public to ride, to hear the sounds, music and stories unfold as you cycle routes through the neighbourhood. Artists: Artur M Vidal, David Henckel, Julian Weaver, Lisa Hall, Michael-Jon Mizra, Natasha Trotman, Paula Garcia Stone, Sherry Ostapovitch and Stephen Shiell with Melaina Barnes & Breathing Space. The stories, noises, interviews, improvised music and songs created a suite of unique sonic cycling experiences for the rider and an interwoven collective orchestra for the passer by. 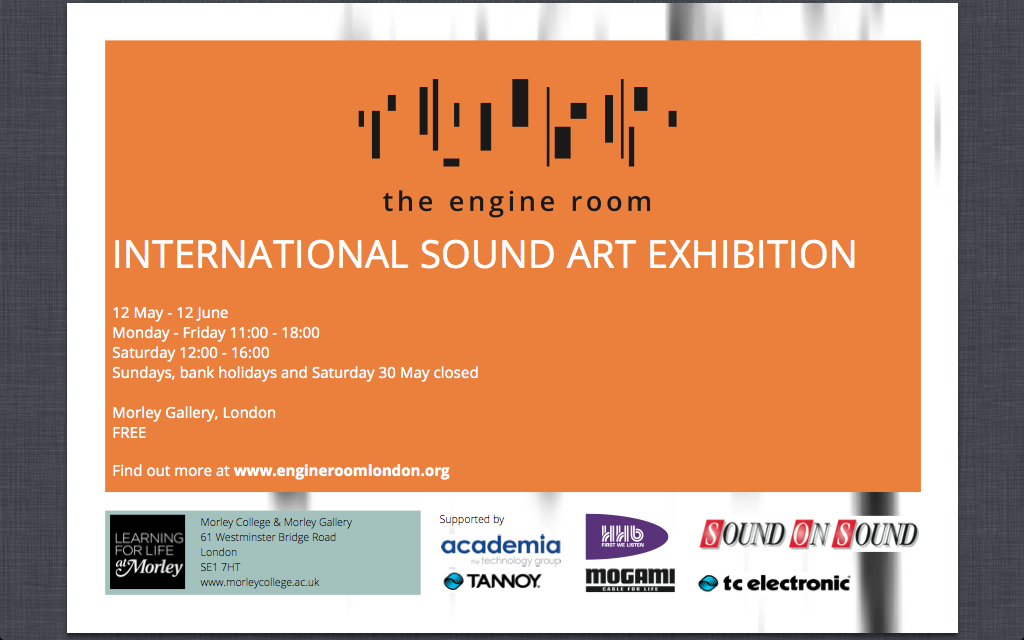 As a city dweller, specifically living in London, where trains are a part of the urban sound environment, I incorporate the city sounds into parallel activities. It is not a solution to sound pollution, but a way of playing with rather than allowing the sounds to be intrusive.
London has a complex network of trains, and the tracks are also used for freight. As there is so much building going on, there is a constant flow of trains going into London and coming out from the centre, often with rubble, passing nearby. There is even a train with nuclear waste going by once a month. These factors are what I address in my soundscape.

‘Nunhead; from dusk till dawn is a nocturnal soundscape using my recordings of the freight trains, foxes and birds (which have adapted to the city by singing louder). It is my impression of living in South London near a rail track. In 12 minutes it covers dusk till dawn with a mix of realistic and dreamy sounds. In the night one is suspended in a mind world, free from the body. Sounds enter the ears and images float out with the breath. Strangely, this intermittent interruption of the approaching and then gliding freight trains makes a huge musical and soothing contribution to sleep. The heaving mixes in with deep breathing, the clanking of the wheels on the track, metal on metal, highlights the dramas of a dream not remembered.

one minute is not enough, DVD : finished pieces to date 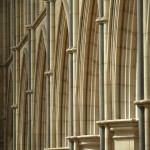 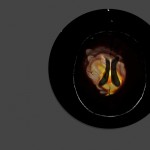 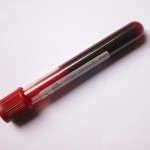 Transplant   (my brief affair with a pancreas) detail, full duration: 7:31

for description of this work go to: http://www.axisweb.org/p/paulagarciastone/ 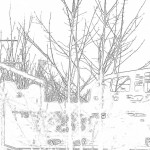